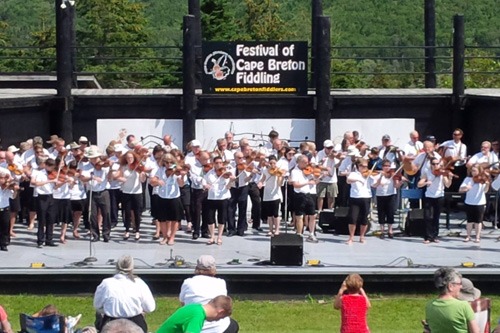 In February, 1972, a CBC documentary entitled The Vanishing Cape Breton Fiddler was produced by Ron MacInnis. The premise of this film was the traditional Cape Breton violin music was in a state of decline, and that it would soon disappear entirely! Reaction to this documentary was swift and disbelieving. The most notable achievement of the film was that it shook Cape Bretoners out of their complacency, and it made them aware of that, quite possibly, the Cape Breton Fiddle was facing extinction. Father John Angus Rankin was one of the key people who vowed that this would never happen! A group composed of Frank MacInnis, Father Eugene Morris, Burton MacIntyre, Archie Neil Chisholm, Father John Angus Rankin, Rod Chisholm, Judge Hugh J. MacPherson, Anne Marie MacDonald, Jeannette Beaton, Joey Beaton, and Ray MacDonald met as a result of a letter sent out by Frank MacInnis. This group discussed the possibility of forming some kind of a fiddlers' festival. This dedicated group of people decided to proceed with the concept; thus, the very seed of the Cape Breton Fiddlers' Association began. Because of the efforts of this determined group, the first Festival of Cape Breton Fiddling was held in Glendale in July 1973. Over one hundred and thirty proud Cape Breton fiddlers arrived in Glendale that weekend and gave one of the greatest concerts ever witnessed in Cape Breton. Several thousand people made up the audience. Preparation for the successful 1973 festival gave birth to the Cape Breton Fiddlers' Association, and its work continues today. The Association's main mandate has been to preserve and promote traditional Cape Breton fiddle music. Since its inception, it has provided workshops and opportunities for its members to learn new tunes and techniques, it has published tunes written by its members, and it has provided venues for musicians to perform for thousands of people. It has nurtured and supported its members to excel; as a result, many of our wonderful members are now performing worldwide. Our membership has increased to include both local, national, and international members. We have been included in several publications, and we have some wonderful recordings to our credit. Cape Breton fiddle music is alive and flourishing both on the Island and throughout the world; and the Cape Breton Fiddlers' Association is proud to have played a significant role in this resurgence.