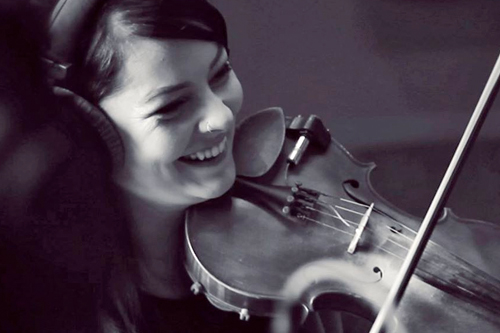 As a Canadian fiddler with a firm foundation in the traditional music of Cape Breton and the irrepressible curiosity of an artist driven to create and discover, Chrissy Crowley is now bringing her music worldwide. As a member of Còig, one of Atlantic Canada's premiere traditional groups, Chrissy won the 2014 Canadian Folk Music Award for Traditional Album of the Year, the Music Nova Scotia Award for Traditional/Roots Recording of the Year, and most recently, the 2015 East Coast Music Award for Roots/Traditional Group Recording of the Year. Coig is an ensemble of East Coast musicians originally forming to promote the Celtic Colours International Festival. In one explosive coming together, what was once solo acts on stage has amalgamated into one electrifying super group, picked as Penguin Eggs magazine’s 2014 #1 New Discovery internationally. With the fiery Celtic style as its musical core, Còig easily shifts between century old tunes of past generations to original and contemporary compositions, featuring the band’s range of over a dozen instruments (vocals, fiddles, piano, guitar, banjo, mandolin, viola, bouzouki, whistles, and more). With driving tunes, haunting songs, and infectious energy, Còig is an unparalleled musical force.Their much anticipated debut album "Five" was released in June, 2014 to rave reviews. Now living in Sydney, Chrissy is originally from the beautiful Margaree area of Nova Scotia, Canada, a place known for its cherished musical culture. The music of the ceilidh resonates in the majestic mountains and peaceful valleys incorporating not only the tunes of the Scottish Gaels but also those of the area’s Irish and French-Acadians. Chrissy has been inspired by the traditions of artists who have gone before. She has embraced the music of her Celtic roots and made it her own.