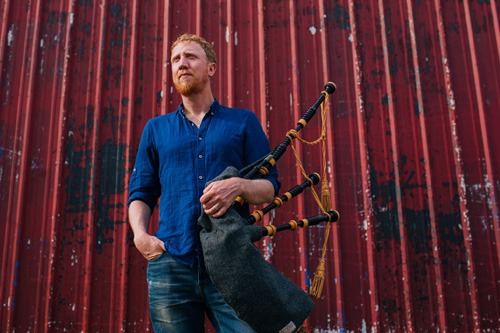 Hailing from the village of Mabou, Cape Breton Island on Canada’s east coast, Angus grew up surrounded by Highland culture and with Gaelic as the language of the home. He started on the pipes at a young age and soon got involved with the Gaelic College Pipe Band, where he received instruction from some of the best pipers in North America and went on to win many competitions both at home and in Scotland. After leaving school Angus headed to the Isle of Skye to study Gaelic at Sabhal Mòr Ostaig. It was during this time that he started his professional musical journey, playing sessions and dances with the original members of Dàimh and many other musicians that were playing on the thriving west Highland music scene. He is involved with numerous musical projects, notably Seudan, a sextet of pipers playing matched bagpipes in A made by Hamish Moore, and also with his brother Kenneth, with whom he recorded the critically acclaimed album Pìob is Fidheall. Angus has also contributed musically on numerous albums; recently with musicians such as Skye’s accordion maestro Blair Douglas, Breton flautist Arnaud Ciapolino, and with an all-star collection of musicians on an album dedicated to friend and musician, Fraser Shaw. Angus is in demand as a tutor of pipes and whistle, both at home on the Isle of Skye and abroad with regular visits to old haunt The Gaelic College, Cape Breton.