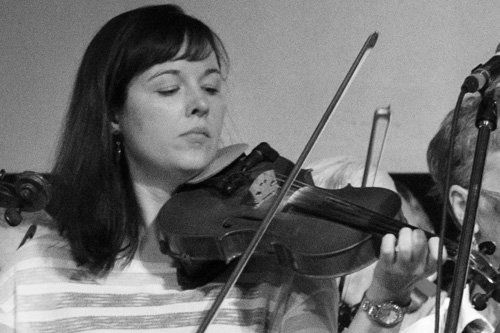 Raised in Whycocomagh, Inverness County, Stephanie MacDonald has been playing the fiddle and stepdancing since the age of 5. She attended classes at the Gaelic College and took fiddle lessons from Karen Beaton, along with many others. She has family connections with the Barra MacNeils, fiddlers Carl and Hector MacKenzie, and Gaelic singer and story-teller, the late Max MacNeil. During her high school years, she was a member of the Celtic Crew, a Dalbrae Academy musical group, and travelled with them to Scotland to perform. Stephanie plays for square dances, concerts, ceilidhs, weddings and community events, and also conducts fiddle, step-dance, and square dance workshops. She is a long-time member of the Cape Breton Fiddlers’ Association and has performed with them in Cape Breton, Prince Edward Island, Maxville, Ontario, Scotland, and Boston. Stephanie teaches high school music, chemistry, and math at Dalbrae Academy in Mabou.