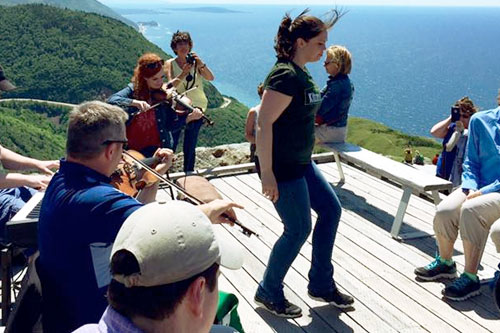 Brittany grew up in Mabou, and now resides in Goose Cove, Cape Breton. She was always surrounded by Gaelic culture with roots in both her mother and father’s families. Growing up, she frequently performed with her four siblings at local concerts and festivals. Brittany has been working on learning Gaelic through community classes, weekend immersions, and language programs since 2012. She is a fluent Gaelic speaker, singer and step dancer. Brittany has taught Gaelic language, song and step dance workshops. She is a mentor for the Gaelic mentorship program, Na Gaisgich Òga | The Young Heroes. In 2016, Brittany completed the Gaelic master-apprenticeship program called Bun is Bàrr, meaning root and branch, where she focused on her dialect with native Gaelic speaker, Anna MacKinnon. Brittany has been an instructor at Colaisde na Gàidhlig | The Gaelic College for the Fàs program (ages 5-7) and youth program (ages 7-14). Brittany welcomes the opportunity to share her love of Gaelic culture with the younger generation.