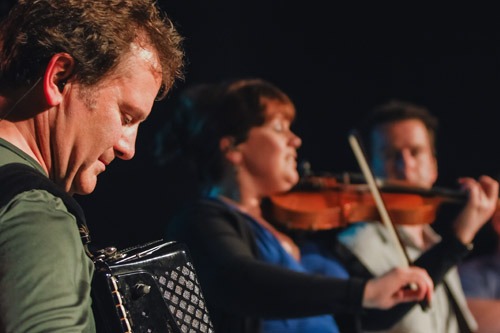 When Stewart was six years old he got a harmonica for Christmas. By dinnertime he could play “These Are My Mountains”. He took it to school in January after the Christmas break and his primary teacher took him around from class to class to play it for them. Music was always there. Good times and lots of relatives and friends being around were always associated with music. Everyone had their own song or could play fiddle or piano or would jump up and step dance. It wasn’t how good you were. It was about being a part of it. With brothers Sheumas, Kyle, he started playing at local parish concerts. Their mother would rehearse a few songs with Sheumas playing fiddle and piano, Kyle on guitar and fiddle and Stewart played harmonica. Sometimes she would play piano with them. They found a balance between playing music and playing hockey- that’s what they enjoyed most. Stewart evolved into a multi–instrumentalist, vocalist, composer of songs, lyrics and tunes, arranger and dancer and continues to explore creativity and art through the 25 years plus career of the Barra MacNeils. Stewart has been learning Gaelic for a few years now and hopes to be fully fluent in Gaelic someday.