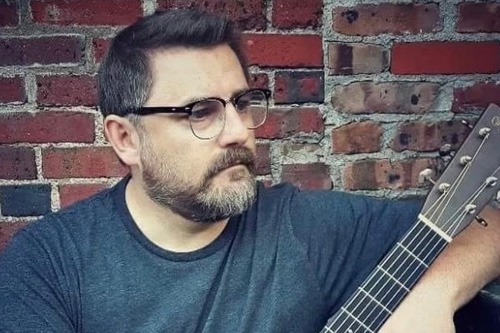 Larry Foley, award winning singer of folk, jangly rock and country. Writes the odd song now and then. Born and raised in Placentia NL. Graduated from STFXU in 1993 with a degree in Arts. Went to grad school in Cork Ireland for the following year. In Ireland he played with fiddle great Seamus Creagh. Is a founding member and still the leader of The Punters for 24 years. He also leads the 8 Track Favourites, a classic country cover band on the go since 2001. Larry has also worked in Radio and currently produces and hosts THIS OLD GUITAR on the eastlink cable network across Canada. He also produces and records for the Avondale label at his studio, Earport Heights. Larry plays weekly either in one of his band and/or solo. He has over a dozen records to his credit. He lives “in Town” with his wife Regina and their four children; Kieran, Greta, Nora and Daniel.